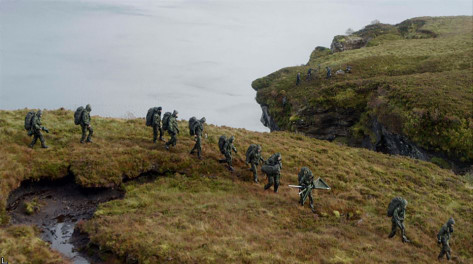 When you think of the tough SAS-training series Who Dares Wins, now in its 5th series on Channel 4, conservation architecture isn’t the first thing to come to mind. But practise partner Tom Robinson used his RIAS conservation architect credentials to advise the production team on this new series, filmed here in Scotland.

Tom’s expert advice was on the use of listed buildings on the island of Raasay. The recruits are based in a disused steading on the remote island off the West Coast of Scotland, and Tom’s expertise ensured the buildings were protected during filming. The planning team from Highland Council were helpful and quick, and all went without a hitch.

Chief Instructor, Ant Middleton and his team have returned to the spiritual homeland of the SAS – Scotland, for this series. It’s the location for some of the Special Forces’ most challenging training and the birthplace of the founder of the SAS.

This series sees twenty-five men and women taken to the remote Scottish island and put through their toughest paces, training and competing along Scotland’s rugged coastline in harsh Highland weather conditions.

The 6-episode show airs at 9pm on Sunday evenings on Channel 4.

If you need advice on a historic building for any reason, do get in touch with Thomas Robinson Architects.